Zec Richardson is a blogger and reviewer at Satonmybutt and will be part of our in-house team taking a closer look at some of our products and today he is reviewing the Hands of Warriors wheelchair gloves.

I have been a wheelchair user for 10 years now. The gloves I have used up to this point have just been functional – not a nice looking or feeling glove.

They are fingerless, not lined, the hook part of the velcro irritates my wrists and my hands turn black if it is raining. But I have pushed on (pun intended) as they do the job.

So when I was asked whether I would review the wheelchair gloves from Hands of Warriors, I agreed – it was time for a change.

However, I did wonder how I would get on with a glove that was built to look good as well as being functional? After all, I am a simple man!

I was sent the white and orange stitch wheelchair gloves that have a fastener on the wrist.

They arrived in a slim box and were wrapped in tissue. This is a very nice touch and it is just a glimpse of the quality of the gloves that are wrapped inside the tissue paper.

I have to admit, I think I may have let out a groan of pleasure when I tried on the first glove.

They are made from the ‘A grade’ Ethiopian hair sheep leather. This is something that I hadn’t heard of before, but there is a rare breed of sheep who grow hair rather than a fleece/wool.

Also, known as Cabretta leather, it is a high-quality leather that is often used for making dress gloves and the leather is coveted for its softness and durability. And you can feel it!

The gloves are lined and slipping them on feels like you have gone into Harrods and tried on a pair of gloves that cost hundreds of pounds, and that is not an exaggeration.

The gloves were very snug to get on, so I wondered whether I had made a mistake with measuring my hands.

But there is actually a good reason behind this – being snug around the wrist means they will be held in place, and once my hands were in the gloves, they fitted just fine.

It also means no more of that nasty velcro that caused me so many problems with my other gloves!

I did have concerns about how the gloves would fare over time. Because the leather is so soft and feels so good, I found it hard to see how they can be hard-wearing.

So I decided I needed to try them out in some difficult conditions. Yesterday, I went along the seafront, giving the gloves more grief than I would normally exert on a pair of gloves. I pushed with my thumbs on the tyre and my fingers around the push rims.

The ground was wet and grit was being brought up on the wet tyres. For me, this was one of the times where I would definitely wear gloves to stop my hands getting sore.

The temperatures were also low and there were high winds, so the windchill was down at about 2°c. Yet, my hands were so warm.

When I got home, I inspected the gloves. I couldn’t see any signs of the start of damage, possibly in part because of the reinforced thumb.

However, I am posting this initial review now and will update it in a couple of months with how they have coped over time and in a few more tricky situations.

They will be priced at £30 per pair excluding VAT, but there will be UK VAT exemptions available for those with qualifying conditions.

Owned by Carina Fordham, she has said that whilst there are gloves on the market that look similar to these but cost a lot less, they are unlikely to be made from the same quality leather. 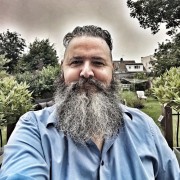 Over 50, told I am grumpy, wheelchair user. I have been blogging and reviewing products since 2015 and produce a written and YouTube review. I met my wife in 1990, we were married in 1995 and we have 2 daughters and three grandchildren.

Review of the Knork from Buckingham Healthcare

Review of the Nimble one finger cutter

We use cookies on our website to give you the most relevant experience by remembering your preferences and repeat visits. By clicking “Accept”, you consent to the use of ALL the cookies.
Cookie settings ACCEPT
Manage consent

Performance cookies are used to understand and analyze the key performance indexes of the website which helps in delivering a better user experience for the visitors.

Analytical cookies are used to understand how visitors interact with the website. These cookies help provide information on metrics the number of visitors, bounce rate, traffic source, etc.

Advertisement cookies are used to provide visitors with relevant ads and marketing campaigns. These cookies track visitors across websites and collect information to provide customized ads.